Derivation revisits one of Michael Eastman’s earliest subjects, Forest Park in St. Louis. Throughout the 70s and 80s, Eastman had documented the park regularly: its people, the water, the flora, and ultimately its decline into crumbling walls and overgrowth. Eastman’s 1992 book The Forgotten Forest, supported by the then-new conservancy Forest Park Forever, walked its viewer through the park in melancholy black and white, shot in the compositionally precise, austere style Eastman has come to be known for.

The photographs in Derivation capture in full color a dramatically different, restored Forest Park of present. These are a formal departure from Eastman’s meticulous past work, being shot sans tripod with a 35mm digital camera while walking on foot. To achieve the images’ stippled surfaces, Eastman devised a “metaphorical lens” for his camera, made from pieces of antique glass found at yard sales and souvenir shops. Eastman works intuitively within this process, placing the lenses before the camera. The resulting visual effect traverses a hybrid territory between photography and painting; the images evoke the Impressionists’ pleinair landscapes while being produced via photographic means. Eastman describes the photographs’ focus as the junction of “sculpture and texture and color and surface,” celebrating their spontaneity and accessibility. 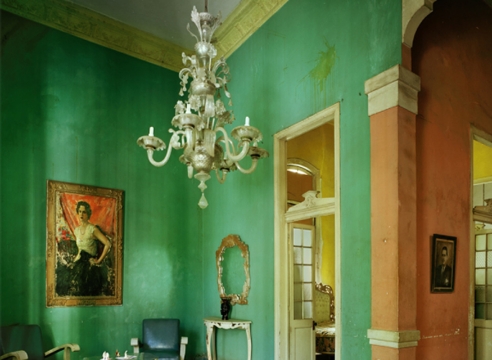